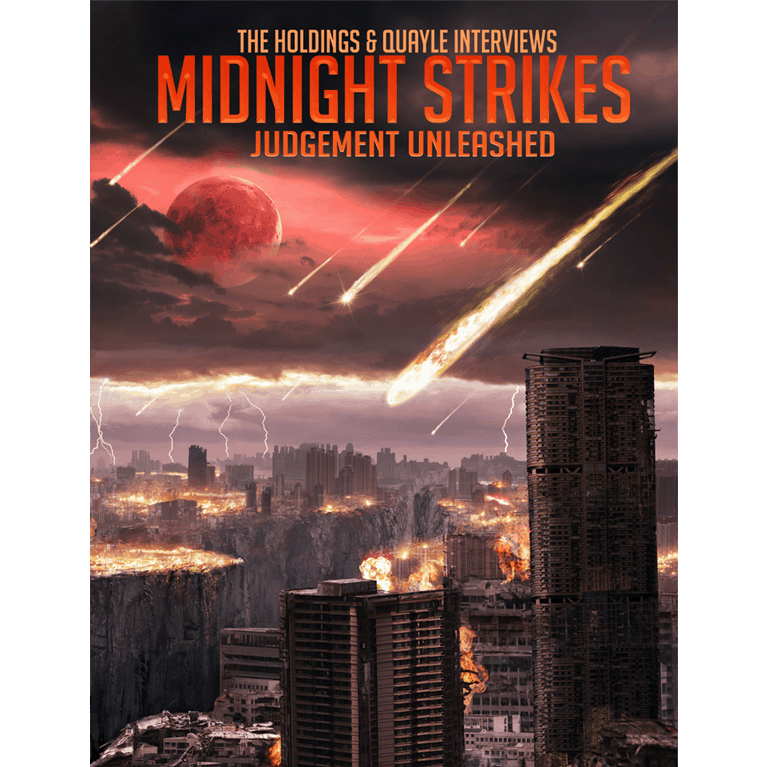 With Warning and preparation Midnight Strikes is a book for both Christians and Nonbelievers alike as the epic conclusion to the biblical narrative unfold. The Church waits for the "rapture" and is unprepared for the cumulative evil and destruction that they too will have to walk through. For the Prepper, there's not enough ammo and food storage, or a bunker deep enough to hide from the events befalling our nation and the world.

These materializing developments are dissected in the detail in never before heard conversations between author Daniel Holdings and preeminent Radio Show Host Steve Quayle. In The Holdings and Quayle Interviews, Steve discusses all of the things that the Lord showed him about what would happen at the End of the Age.

With in-depth analysis affirming each point, Daniel draws the Watchman's thoughts out as the men discuss:

And there shall be signs in the sun, and in the moon, and in the stars; and upon the earth distress of nations, with perplexity; the sea and the waves roaring;  Men’s hearts failing them for fear, and for looking after those things which are coming on the earth: for the powers of heaven shall be shaken.

Can you feel it?  The ground under your feet has shifted.  The framework for the culmination of human history has been set.  The reality that you once knew has drastically changed – America and the world will never be the same.

The book that you now hold in your hands is a roadmap to many of the things that are occurring or that will occur in the very near future.  This map doesn’t contain everything that will happen, but it does encompass a plethora of events and information that God Himself has chosen to release only now.

When Steve Quayle first got saved, he physically stood before Jesus.  In a panoramic of mankind’s future, the Lord showed him many of the things that would happen during the “time of the end”.  Almost as quickly as He had shown them, Steve forgot most of what he saw.  Then the Lord told him that He would bring those things back to his remembrance just before they were going to happen.  The Lord also commissioned Steve to warn God’s people about what was going to transpire.  It’s only at the penning of this book that God has not only reminded Steve about most of those events, and the Lord has now released him to share those things with you now.

Daniel Holdings started working with Steve way back in 2011 when he was writing his second book, As the Darkness Falls.  For that book, Daniel contacted Steve and asked his permission to make this founder of the Prepper movement a character in his book.  Steve agreed, and the two men have been friends ever since.  Steve has often solicited Daniel’s help in the background of his own work in the form of research, as a sounding board for a variety of issues and as a confidante.

Jesus – The Premise of the Promise, Steve’s most recent book, was supposed to be his swan song, his final authored title in which he spoke about the thing that mattered most in life – Jesus. Yet, in the course of Daniel and Steve’s conversations, the veteran talk show host shared with Daniel that many of those End Times things that the Lord had showed him were now crystal clear in his mind.  Those were the things that were supposed to happen shortly before the Return of the Lord.

In spite of the fact that Steve wasn’t led to write another book, at Daniel’s insistence Steve agreed to speak with Daniel “on the record” about what he’s seen and to help Holdings pen a work that will clearly demonstrate how we are in the time of the end.  This is that book.

This work captures the two men’s thoughts in a series of conversations about the End of the Age using Steve’s visions as a launching point for a greater discussion.  It also contains Daniel’s own in-depth research on those issue and more.  That research is then presented in a succinct and informative background to the items discussed.

You need to know that time is short.

There are two things to note of primary importance about this book.

First, it’s not necessarily designed as a religious book.  While that may sound strange given the fact that it deals with End Times issues, the fact is that these things ARE transpiring now.  This IS reality.  That reality affects the Christian and non-Christian alike.  If you were traveling down the road and a Christian stood by to tell you that the bridge was out, would you ignore the advice just because he’s a Christian?  Of course not.  This is a warning for anyone who will listen, and it is imperative that we prepare now, on this side of those events.

Second, in spite of this work speaking about prophetic things, neither Daniel nor Steve would call themselves “prophets” and they certainly don’t aspire to be considered as such.  These men only want to be obedient to what the Father has shown them, and they take no credit for these truths coming to light.  However, without question, both Daniel and Steve have talked about things that would happen before they happened.

While most people know who Steve Quayle is, Daniel Holdings is nowhere near as recognizable as the veteran radio show host, author and personality.  However, Holdings is a gifted author and researcher in his own right.  In addition, Daniel has also done radio and possesses the unique ability to draw out conversation and information from guests that he is interviewing.  This is why this book is such a vital tool.  You’ll see within these conversations, these interviews, the two men bounce off thoughts and ideas between one another about what God is doing in these days.

Best known for his fictional trilogy of The Cooper Chronicles, Daniel started writing those books nearly 10 years ago.  What has garnered people’s attention is the fact that many of the things that Daniel wrote in those fictional works have actually come true.  So stunning are the revelations that even Doug Hagmann used the phrase “Faction” to describe Daniel’s books.

Daniel has also dealt with some heavy topics in the series or spoke about them plainly on the radio.  For instance, Holdings talked about the discovery of the God Particle, the Higgs Boson, before it was found.  He also penned about a group of bloodthirsty Islamic terrorists that wanted to make a new Caliphate and rose up out of Syria.  In his fictional books, the initials for that group were the ISNW.  People are stunned to learn that he wrote about this group four years before anyone had ever heard of ISIS!  In addition, nearly ten years ago he wrote about how scientists at CERN would try to use the Large Hadron Collider as a way to bridge the gap between dimensions and interact with entities on the other side.  People were surprised when CERN scientists, in real life, came out and plainly stated those goals to the public.  Daniel also spoke about events that were yet to happen but appear to be on the cusp of fruition.  In one of his stories he wrote about the destabilization of the Cascadia Subduction Zone off the coast of the Pacific Northwest that would cause a devastating earthquake and tsunami.[1]  And with recent warnings about mega-quakes and volcanic eruptions, once again his readers minds were drawn back to his books.

Daniel says that he wanted to share these issues that the Lord had shown him but was concerned that people wouldn’t accept the truths for what they were.  To make them more palatable, he put them in story form, fiction, to help his readers glean this important information.  But there is no more time to dance around these subjects.  He strongly believes that plain talk about an impending future is absolutely necessary.

For his part, when Steve Quayle started on radio 25+ years ago, he talked about how water municipalities couldn’t filter out excreted female birth control drugs, estrogens and other pharmaceuticals in drinking water.  He stated that the drugs would have the effect of feminizing men and would have other adverse effects on the population.  Today we see men’s sperm count lower than ever before, the birthrate declining faster than at any time in our history and other detrimental consequences on humanity’s physiology.  Studies have now linked these issues to those very same estrogens and pharmaceuticals![2] [3]

Steve was also one of the first people on radio to discuss the remains of giants around the world, which has now become common knowledge throughout the archaeological community.  He was one of the first hosts to speak about other issues like chemtrails even though the government has only just acknowledged their efforts in geoengineering[4] within the last few years. Also, a documentary film producer, he’s currently working on a film about the danger that the Cascadia Subduction Zone poses to the west coast of America, Canada and the entire Pacific.  His other topics such as the military commissioning autonomous, Artificial-Intelligence-driven, Killer Robots sounded like science fiction at the time that he initially talked about them.

Today, we see all of these topics capturing headlines in the news.  Yet, these men spoke about these issues before they happened.

Midnight Strikes is a siren call of God’s warning about those things that will imminently appear in our own reality.  There has never been a book published quite like this before, and we dare say that there’s not enough time left for another to be written.

Holdings and Quayle together gives you a unique and powerful insight into the near future.  Read this work carefully and you too will be surprised to understand just how far we are into the End of the Age.

Time is up – Midnight Strikes.

[3] The Guardian, “World’s rivers ‘awash with dangerous levels of antibiotics’,” https://www.theguardian.com/society/2019/may/27/worlds-rivers-awash-with-dangerous-levels-of-antibiotics, (l.a. May 27, 2019).

There are no reviews yet.

Only logged in customers who have purchased this product may leave a review.

Shopping Cart
There are no products in the cart!
Subtotal
$0.00
Total
$0.00
Cart
Checkout
Continue Shopping
0